Glossary of the Indian Penal Code, 1860 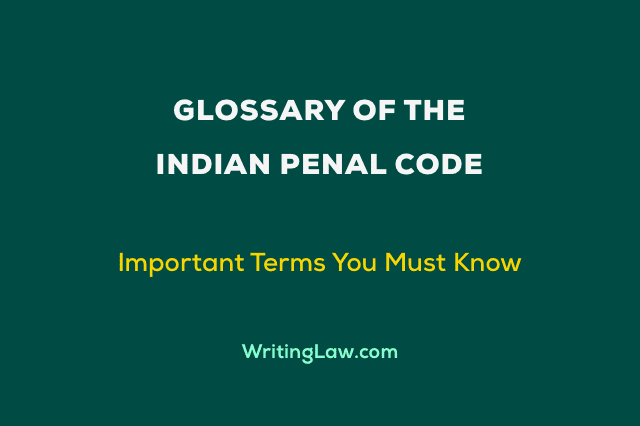 The terms mentioned below are the legal glossary of the Indian Penal Code, 1860. All these words and phrases have to be understood in concern to the provisions mentioned in the IPC. These are essential for all law exams and legal life in general.

1. Intra Territorial– Any offence for which a person is liable within India.

2. Extra Territorial– Any offence for which a person is subject to Indian law, tried outside India.

4. Person– The word person used in the whole IPC includes company, association, or body of persons also. They are incorporated or not is not essential.

5. India– The word India means the whole territory of India, including Jammu and Kashmir.

7. Wrongful– Anything which is not lawful in law or to which a person is not legally entitled.

9. Fraudulent– An act to deceive someone with the intent to defraud.

11. Omission– To omit an act is also an act. This means not to do something.

12. Intention– Intent to do an act willfully.

13. Common intention– An intention that is shared by all who are involved in a particular act.

14. Knowledge– When a person has the sense, or he knows the consequences of committing an act or what would be its result.

15. Voluntarily– To cause something without any undue influence or force or pressure.

16. Offence– Anything which is punishable under this code.

17. Good faith– Anything done with due care and attention.

18. Imprisonment– To put a person behind bars or in prison for a specific period of time.

19. Commutation– It means to lessen the term or degree of punishment given to an offender.

20. Contrary to law– Doing an act which is not permitted under law.

21. Involuntarily– An act which a person does against his will or desire.

22. Consent– Affirming or agreeing on something expressly or impliedly.

23. Administering acid– It means to provide someone with acid or give acid to someone for usage.

24. Instigate– It means to provoke someone to do any act.

25. To aid– It means helping other person by doing an act or by omitting such act.

27. Grave provocation– To deprive a person of being sensible or to make him out of control of his senses.

28. Transfer of malice– When the target of a person misses, and he hits some other person.

29. Acquittal– A person who is discharged from all his charges or liabilities in a case. It means setting a person free.

30. Motive– A reason or purpose which gives birth to intention to commit an act.

31. Negligent– It means not taking care of one’s own duty towards others.

32. Attempt– It means trying to accomplish act or doing of an act which does not result in probable consequences.

33. Emasculation– To deprive a man’s vigour or his sexual capability.

36. Assault– It is a visible representation of any organ of the body to create an apprehension in the mind of other that criminal force is about to inflict on him.

37. Sexual overtures– It means trying to induce a woman sexually, offering her favours and gains as negotiation.

39. Persistent vegetative state– A condition in which a patient does not respond to any action by using his brain functions. He remains alive only with the help of medical aid.

41. Possession– To have control over something which may or may not be of the person who is possessing it.

42. Injury– Injury can be caused to the mind, body, reputation, or property of a person.

43. Dishonest misappropriation– To convert a thing for one’s own use knowing that to whom it actually belongs.

44. Cohabitation– To cohabit means living together of a man and woman and engaged in sexual relations without the status of marriage.

45. Defamation– To impute someone by words or signs or any other form of representation that can harm or damage a person’s reputation among respectful people.

46. Cognizable offence– It is an offence in which a police officer can arrest a person without warrant.

47. Non-cognizable offence– It is an offence in which police requires a warrant from the court to arrest a person.

48. Bailable offence– An offence is bailable if it is bailable according to the first schedule in CrPC. It is a case where a person gets bail as a matter of right.

49. Non-bailable– An offence which is shown as non-bailable in the first schedule of CrPC.

51. General exceptions– These are the defences that an offender can use to defend himself from accusation.

52. Trespass– It means to enter into someone’s property or right to use of enjoyment without prior consent.

53. Fine– It is a monetary punishment imposed on a person in criminal law. That is to pay some amount for doing criminal wrong.

54. Penalty– It means imposing punishment on an offender by the court. It may be in the form of damages, compensation, fines, imprisonment, or any mode. Penalty is imposed in civil as well as criminal cases.

55. Restraint– To restrain means restricting a person from moving in a particular direction.

56. Confinement– To confine a person means to restrain him from going anywhere or in any direction. That is a complete lock or restriction.

57. Voyeurism– To capture the image of a woman when she is engaged in some private act. Where she has a reason to believe that no one can see her.

58. Stalking– It means to follow a woman by physical means or social media or through electronic communication.

59. Doli incapax– A person who is incapable of committing a crime due to reason of age. It is for the age group 0-7 years old.

60. Doli capax– It means a person of age group 7-14, having a sufficient sense of reasoning between right and wrong. They are tried on the basis of their intention, knowledge, and capability to commit wrong. They are treated as juveniles only.

If you are a regular reader, please consider buying the Law PDFs and MCQ Tests. You will love them. You may also support with any amount you like. Thank You.
2020-09-13